CALENDAR OF EVENTS..
November 15th – CQ Tuesday
November 24th – Thanksgiving
December 8th – Club Christmas Party
The Club meeting held on Thursday, November 10th did not have connections on Zoom. The venue’s coverage did not reach the room we were in.
The election of members of the 2023 Board was successful. The new Board consists of Paul KBØP, Bill KB3KYH, Robert KA9BXG, John WØLFE, Dave KD9HJJ.
They will be meeting soon to choose the Officer positions. They will be taking office at the beginning of 2023.
After discussion about the proposed ByLaw change,  a vote was taken with the majority in favor of accepting the changes. Basically, it was to reduce the number of Board members from seven to five and to remove the duties of the Members at Large.  You will be able to see the new ByLaw changes on the web site in a few days.
The Shack:
You may or may not have heard  that there has been some problem with operation at the shack. First indication was that there was water found in the coax near the 4BTV antenna. When trying to transmit on the new DX3000, it would trip out.    Three volunteers took the line apart and replaced the corroded barrel connector, took down the antenna, took it apart, cleaned and put conductive lube on the pipe pieces, put on a new capacitance hat and an coax adaptor to replace the screw connection. Reinstalled the antenna on the roof.
A few days later, tried the radio and it would trip out again. Tried a different radio and it tuned right in. Actually, made a contact to 4U1A.. United Nations in Austria..
While at the HamCram, some members tried the DX3000 again and it still tripped. It was noted that when the output was reduced to 5Watts, it tuned. The meter on the Astron Power Supply was steady when transmitting. Was it the power supply?  Switched to the other supply and everything began to work !! The first supply was a current limiting supply and was set low, there by- when trying to transmit, drew more amps than what the supply was set to. Tripping the supply rather than the radio .. but it appeared that the radio had tripped because there wasn’t any power.
Also found that the “pot”s needed a little wiping to clean them up..
Is it working? Look at the photo… FT8 … 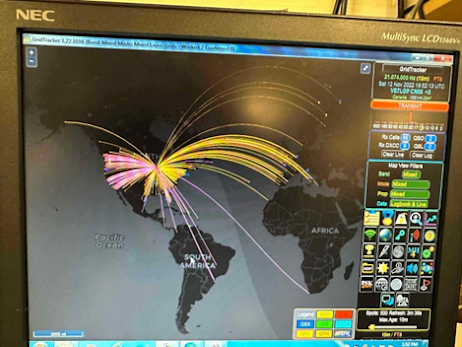 These are the contacts made via FT8 from the Shack at St Norbert on 11/12…
HamCram…
Rick W9OBB, was the facilitator for the HamCram. There was a nice size class with the youngest at 11 years old. The results of the testing showed 10 new Techs – 1 General and 1Extra Congrats
DUES ARE DUE:
Our Treasurer reminded us that we should be paying the dues prior to the first of the year. If you do not pay, you will be removed from the roster in March..
. You can pay with credit card by picking on the PayPal logo from the website or mail your check to Mike & Key Club, P.O.Box 13351, Green Bay, WI 54307
Thinking ahead..
The Green Bay Mike and Key Club's annual Christmas party will be held Thursday December 8th starting at 5 p.m. at the American Legion, 1708 N. Irwin St, Green Bay. This will be a catered meal from Julies, Chicken and Beef Tips with a $10.00 cost to all attendees. Bring your own alcohol beverage of choice, Soda and water will be provided by the club. A white elephant gift exchange will occur. Bring one, get one. R.S.V.P. by December 1st to WØLFE by radio, text to 920-606-4692 or email WØLFE@ sbcglobal.net.

at November 15, 2022
Email ThisBlogThis!Share to TwitterShare to FacebookShare to Pinterest