At the Christmas meeting at Klipstine park, last night the board worked out amongst themselves who-is-who for 2012.

A Look At Green Bay Repeaters Over The Years

http://www.k9eam.org/1980/03/amateur-radio-opperators-of-brown.html
at November 16, 2011 No comments:
Email ThisBlogThis!Share to TwitterShare to FacebookShare to Pinterest 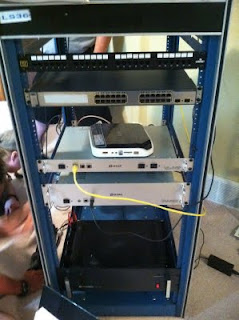 Like it or not, the future of two way radio is digital, and we must also advance in this direction.

TV broadcasters were required to be full digital and shut down their analog transmitters in Feb. 2009. This freed up spectrum for the new "700 MHZ public safety band" that is currently being implemented in Brown County.

There is also an FCC mandate for all non-public safety stations to operate on channels with a bandwidth of 12.5 kHz or less beginning January 13, 2013.

The digital premise is that it generally allows more use in a more efficient/ flexible use of band space.

The Mike and Club took advantage of a recent D-Star promotion to enable area amateurs to get their feet wet with digital two-way radio.

Further details can be found on the D-Star page.
at July 10, 2011 No comments:
Email ThisBlogThis!Share to TwitterShare to FacebookShare to Pinterest
Labels: d-star

Ham radio operators have long been some of the original open source , Do-It-Yourself (DIY) proponents.

Going back in time, radio stuff was expensive and out of the reach of a lot of hams. So they invented newer and mostly cheaper ways of doing things. They also came up with better ways of doing things because somebody else would see that idea in print and improve upon it. Of course the technology was rather rudimentary, and there was little way to go but up at that point in radio technology calendar.

What most people tend not to think about is the open-source nature of Amateur Radio. While operators most often are seen working in emergency situations, many of the modern conveniences we have today—cell phones, satellites, wireless devices— were developed and tested by radio amateurs.

Decades ago, amateur radio operators were on the forefront of scores of technological innovations, including television, digital communications, solid-state design and cellular networks. The hobby's roots trace back to radio pioneers such as Guglielmo Marconi and FM-inventor Edwin Armstrong.

Well a lot has changed over the years in society and ham radio. Many amateurs have gotten away from these "do-it-yourself" roots. But those types are still out there!

"The American tradition of tinkering -- the spark for inventions from the telephone to the Apple computer -- is making a comeback, boosted by renewed interest in hands-on work amid the economic crisis and falling prices of high-tech tools and materials.

Engineering schools across the country report students are showing an enthusiasm for hands-on work that hasn't been seen in years. Workshops for people to share tools and ideas -- called "hackerspaces" -- are popping up all over the country; there are 124 hackerspaces in the U.S."

In 2005 just shortly before the economic mess stated to unfold, Make Magazine was introduced by O'Reilly Media. It focuses on do it yourself (DIY) and/or DIWO (Do It With Others) projects involving computers, electronics, robotics, metalworking, woodworking and other disciplines.

The magazine was well accepted by engineering and electronics students. And led to the first Maker Faire. An event filled with DIY projects, science, demos.

These "fests" are now in their 6th year, and being held in California, Detroit and New York and many other places.

As mentioned in the Wall Street Journal article, regional groups are popping up all over the place to help support this innovation. These are referred to as Makerspaces/ Hackerspaces. They are places where people with common interests, usually in science, technology, or arts can meet, socialize and collaborate. A Makerspace can be viewed as a community lab, machine shop, or workshop where people of diverse backgrounds can come together to share resources and knowledge to build/make things.

There are two that I know of in our area:

If you still have a bit of "amateur" in you, I encourage you to branch-out and check these innovative groups out. I think there can be / should be a lot of crossing over and sharing of talents between some ham radio folks and these groups. These are the types of people that need to welcomed with open arms into the hobby.
at June 14, 2011 No comments:
Email ThisBlogThis!Share to TwitterShare to FacebookShare to Pinterest
Labels: tech 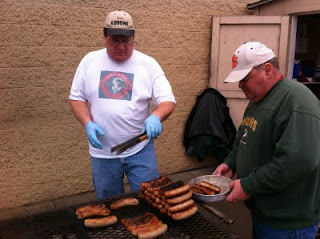 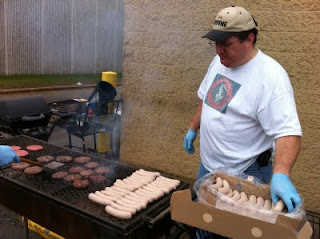 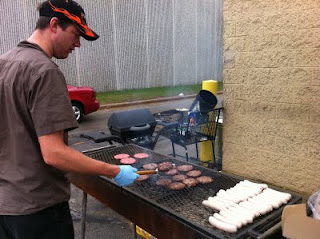 Here are some pictures from the April 23rd brat barn at Festival Foods East.


The weather was good, so was the brat barn. The next one is in just a few days (June 5th), this time at the Festival Foods in Suamico.

Setup usually starts around 9am. We need people to setup and people to man the booth all day long.
at May 28, 2011 No comments:
Email ThisBlogThis!Share to TwitterShare to FacebookShare to Pinterest

PL does not prevent or cure RF interference, it just adds selective earplugs. Nor does it allow several users to share the same frequency channel at the same time.

If two RF signals are on the same frequency at the same time, there will still be interference. If the signals are close to the same amplitude, the user will hear a heterodyne or beat note. (Google “radio capture effect” for more information on how that works.)

The only real way to share a RF channel is by properly spacing the two repeaters or stations apart. This is why we engage in voluntary frequency coordination. (i.e WAR). From a repeater user-end perspective, using the least power necessary to carry out the desired communication is paramount to enable effective frequency re-use. This is why that is in the rule book.

If everyone ran 100 watts all the time, you’d likely be clobbering the input to several repeaters in the state, even though you might not be bringing them since they likely all have different tones.

This is why when the band opens up, it can be tricky to get into your own local repeater with a HT. The repeaters receiver might be being swamped by strong signals from other hams in other adjacent areas.

Keep in mind the repeater can hear things you can’t as it’s up very high on a tower.

Now going back to the notion simultaneous frequency use. It is actually possible. But you have to do this digitally. Once the voice is digitized you can time-slot the channel. Google “Time division multiple access (TDMA)” for more info. Or see this video: http://hak5.org/episodes/episode-816

The newer Mototrbo radios are TDMA.
at May 22, 2011 No comments:
Email ThisBlogThis!Share to TwitterShare to FacebookShare to Pinterest
Labels: tech

The 147.360 repeater is back on the air as of this weekend. This repeater is located at Bellin Hospital. We also installed the battery backup in both the 147.360 and 147.120 repeater controllers.
at March 27, 2011 No comments:
Email ThisBlogThis!Share to TwitterShare to FacebookShare to Pinterest

Ham of the Year

Congratulations to Keith Summers for being this years Ham of the Year. The award was handed out at last nights banquet. We had about 20 people attend.
at March 27, 2011 No comments:
Email ThisBlogThis!Share to TwitterShare to FacebookShare to Pinterest

The March of Dimes Walk America will be on Saturday April 30th, starting @ 9 AM. There will be a 1 & 3 mile route. Rest stops will be at Canteberry Park & Glass Nickel Pizza on Ridge Rd. Three to four volunteers are needed to man rest stops & serve as NCS for this event.
at March 22, 2011 No comments:
Email ThisBlogThis!Share to TwitterShare to FacebookShare to Pinterest

We will be having the Annual Green Bay Mike and Key Club Banquet on March 26th at The Ravine located at 2633 Manitowoc Road Green Bay WI. The meal will consist of Chicken and Tips. The price is going to be 15 dollars.


I am assuming the time will be social hour 5, with meal at 6 or 630. If you were not at the meeting and did not fill out your ham of the year please email them to me at kb9sne@yahoo.com. I am assuming we will count these soon as we need to get the plaque done. Also please email John Wolfe (w0lfe@sbcglobal.net) a head count, we need to get this into the location the week before the banquet. Any question feel free to email me.
at February 13, 2011 No comments:
Email ThisBlogThis!Share to TwitterShare to FacebookShare to Pinterest

At an executive meeting just before yesterdays general meeting the board worked out amongst themselves who-is-who for 2011.