Note for Baofeng Buyers at Hamfest

*Item from the HamFest .. IF you know if you or  someone that purchased some Baofeng radios from N8KQS,  they may have the wrong chargers.. It was pointed out that the 5 watt radios had some 8 watt chargers and vise versa .  The 5 watt chargers are square cornered where the 8 watt chargers have rounded corners and do not make good contact for charging. Replacements are available on a swap basis.

There are still some Baofeng radios left.. Spare antennas... headsets.. speaker mikes.. two UPS units... a MFJ dummy load... spare chargers for the 5 watt units.. other odds and ends... All receipts go to the M&K Club.   920 227 3235
at July 20, 2022 No comments:
Email ThisBlogThis!Share to TwitterShare to FacebookShare to Pinterest

Here we are at the middle of the  calendar year already.. at least it seems  to have arrived faster this year.. A  seemingly different weather pattern  with windy days and lower humidity  (except today, of course).

It may be a good time to check to see  what is ahead before school starts and  the football schedule comes out… It still  amazes me how that influences stores,  weddings, trips, parties and even  church services.

1. A number of years ago, someone  noticed that there was a National  Lighthouse Day on August 7th every  year. There were even Special Events  for that in QST. An idea was born.. we  could do that too.. and we did… This  year – it is on a Sunday. Want to give it  a try??

There are two lighthouses right here on  the river.

If you go toward Bay Beach

Amusement Park.. then go Northerly on  North Irwin Ave alongside the park it  turns into Bay Beach Road. When you  get near the end of the road, there is  public boat landing on the left and just  past that, is the Green Bay Yachting  Club.

Within their property are the two  Grassy Island Range Lights. National  Numbers #334 & #339.

Two years ago, 2 million dollars were  spent on renovations which is quite  evident.. You can visit there on  Tuesdays from 5PM to 7PM when the  gates are open.. On Aug. 7th, there is an  Open House from 10AM to 5PM.. bring  the family.

2. As August rolls near and you can  still hear the corn growing at night, it  brings thoughts of roasting corn on the  grill or fire pit.. Picnics… Club Picnic??

As you may have heard, there will be  some changes made to the area we  have used for Field Day for the past  years and it will not be available any  more.

A suggested location has been put  forth. The Village of Hobart has another  park a little North of where we were. It  is the Four Seasons Park. It is located  on 40 acres. Lots of room, no doubt. A  new shelter.. But if you get an  opportunity, take a ride there and look  it over.. like everything else, “Beauty is  in the eye of the beholder”.

This might be brought up at the Club  meeting this week.. 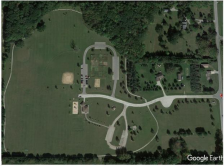 at July 14, 2022 No comments:
Email ThisBlogThis!Share to TwitterShare to FacebookShare to Pinterest

Link to the Press Times article about the Mike & Key Club...
https://gopresstimes.com/2022/06/24/amateur-radio-club-to-participate-in-field-day-encourage-others-to-join/
CALENDAR OF EVENTS..
July 9th – Hamfest at Oak Creek South Milwaukee Swapfest 2022!  7:00 am to 3:30 pm --Sellers can enter at 6:00 am…$5.00 per person at the gate--American Legion Post 434 --9327 S Sheppard Ave, Oak Creek Wi - Talk-in Frequency 146.910 127.3PL -offset
July 13th – Siren Test Net
July 14th – Mike & Key Club Meeting – 7PM St. Norbert College, Science Bldg, 4th floor
Field Day
A great start with a large group for breakfast at the Oak Street Café. KA9BXG and N9BC arrived at the site earlier and started setting up.. they set up a satellite tracking antenna system and two HF antennas plus the radio systems. When the rest got out to the park, a OCF 2-80 antenna was set up and an all band vertical by K9IQ was attached to the baseball area fence..
The entire shelter was rented.. we had thought that there was a kitchen behind the small window doors… it turned out to be empty, save but a refrigerator and a junior fire vehicle. One radio station was placed in there which turned out good when the misty rain and cool winds came.
The generator power lines were run and the laptop logging software was energized. At 1PM the radios were activated and the logging began. The lack of high powered HF signals was quite evident this year with the new ruling. 20 and 40 meters were humming. Most modes, digital, cw, and phone were being used.
Around 5:30 some of the brats and burgers were cooked and the dishes to pass were plentiful… so the camaraderie commenced.. and the stories and other chit chat continued on for a few more hours….
The night was uneventful.. until after waking from a nap at 4am, I turned on radio on 10 meters and made a contact. Turned on the laptop and filled in the information in the log. Pressed the enter button… that log was on the screen but the other 271 contacts disappeared!! .PANIC.
I went over to Master laptop and it was just showing the regular desktop on the screen. Picked on the N3FJP icon and it came up with everything there- phew --- but 10 seconds later it looked like the first one -  with just one contact!!....
The wifi was on for tying the logging together .. but the networking was not working on the software… I decided to just wait until the Wizards of the Keyboards came in.
It took a little while but the logs were found and put back on the main computer but the linking through the network still did not function. So we continued to log independently and the logs would have to be joined after FD.
A beautiful Sunday morning and the sounds of “.. K9EAM 4 alpha whiskey india” continued.. Sometime after Noon, the generator was about ready to need refilling. The contacts began to fade, so everything began to be disassembled and put away.
A big thanks to all that came out to set up, operate, cook, eat, chat, log, experiment and take down the area. That goes for the YLs, XYLs, SWLs and those that came out because they read something in the paper about Field Day and were reignited to be a Ham.. Thanks AB9GK.          That may have been our last time at Pine Tree Park.. from a couple of good sources, that there may be changes made there which might cause the shelter to be removed. So rather than waiting for next year to think about it, start looking to give suggestions for a new Field Day Site. The difficult part… is to be able to stay overnight. Hobart has been very good to us in that regard.
Ever hear of RATPAC?
https://www.ratpac.us/
Radio Amateur Training Planning and Activities Committee (RATPAC) comprises Amateur Radio Operators of a wide variety of backgrounds and experiences.
Together, they host nationwide Amateur Radio Zoom presentations twice-a-week, Wednesdays on general radio topics and Thursdays on amateur radio emergency communications. The topics are selected from audience recommendations that the planning committee then seeks topic experts or discussion panel members.
The presentation audience consists of thousands of amateur radio operators worldwide who participate directly in the Zoom sessions or with video links of the presentation and related documentation sent out after each session. July 6, Beginners VHF-Getting Started
Go their web site to see all  the programs that are available...
73… Stay Radio Active
at July 03, 2022 No comments:
Email ThisBlogThis!Share to TwitterShare to FacebookShare to Pinterest
Newer Posts Older Posts Home
Subscribe to: Posts (Atom)