October 12th- Siren Test Net
October 13th- M&K Club Meeting
October 15th- Scout Jamboree On The Air
October 15th–ARRL Convention-Wis.Rapids
October 22nd –HARA Hamfest- Naugaunee
November 5th -Friendly Fest-Milwaukee
November 6th – Fox Cities Hamfest-Kaukauna
STEMpede: I think everyone has heard of the STEM program by now.. It covers most of the phyics we had in school.. The Scouts will have a great opportunity to have some practical practice with a lot of things in science and math. We hope to be able to provide some of those points with radio technology on Oct. 8th.  This will be our 6th time (counting the STEM pocket patches  )
Club Meetings:
For the October and the November meetings, the meetings will be held on the second floor of The Brick House. 500 Grant Street, W.De Pere. This meeting is a very important one with the nominations of those to be on the next year’s Executive Board. This is the first of the nominations. Be sure to read the minutes of the last meeting to catch
up on what else may come up for discussion..
Nominations will continue at the November Annual Corporation Meeting followed by the Election of the Board. Any proposed  ByLaw changes will be voted on also.

Oct. 15th Scouting Jamboree On The Air… J.O.T.A. Modern technology offers Scouts the exciting opportunity to make friends in other countries without leaving home. JOTA is an annual event in which Boy and Girl Scouts and Guides from all over the world speak to each other by means of Amateur (ham) Radio.

There used to be a conflict in years past with the Scouts Food Drive on the same day.. Not this year… so we are anticipating a good turn out. Hope to have about 6 or 8 of us plus a couple or three stations (Hint- bring radios)   The American Legion, 1708 N Irwin Ave. will be our location this year. If you have some time, stop by and give a hand or information..  9am to ~1Pm
In 2014, over 1.3 million Scouts, Guides/Girl Scouts participated in JOTA..

A new year is coming up and time to get involved and enjoy the hobby with others of similar mind..
The Club consists of those that experiment with radio transmitters, beacons, satellites, antenni or enjoy contesting, collecting countries, counties. Plus we have operators that enjoy mentoring newbies and provide training…
Are you a member of the Mike & Key Club? Now is a good  time to join or continue your membership … go to the K9EAM.ORG web site… fill out a membership form..you can find the link on the righthand side of the site .. dues are due now to December. You can pay with credit card by picking on the PayPal logo from the website or mail your check to Mike & Key Club, P.O.Box 13351, Green Bay, WI 54307

Things  that we have historically scheduled:

October: Nomination of Board members and Plan Christmas Party: JOTA (Jamboree on the Air)

November : Annual Meeting – Elect Board Members   **Just to note that it was suggested in Sept. that the Board choose their officer positions after the election rather than wait until Dec. **
December: Christmas Party – Officers positions chosen.
Winter Field Day..
January:  Set up chairpersons for : 1.Wis. QSO party. 2. Banquet 3. Hamfest. 4. Brat Barn. 4. Field Day.    5. Picnic. 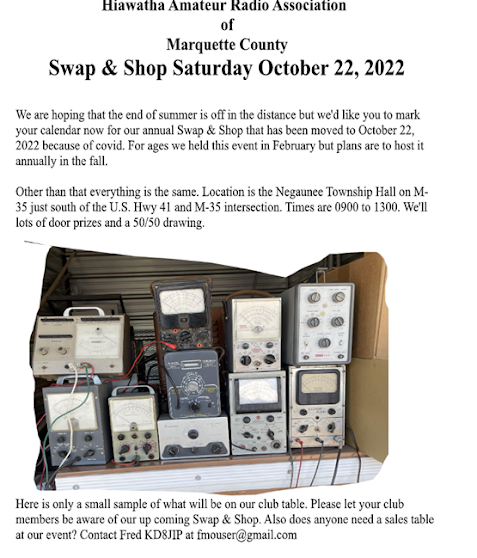 A little science as we get ready for STEM..

According to science lore, Galileo dropped two balls from the Leaning Tower of Pisa. In fact, it seems unlikely that Galileo actually carried out this experiment. But he supposedly was trying to show that those balls would fall with the same acceleration. Their change in speed due to gravity would be the same, no matter what they were made from or how much they weighed.----                        Einstein’s equivalence principle holds that this inertial mass is equal to the gravitational mass. And if that’s true, then two different objects should fall at the same rate (at least when they’re in a vacuum, where air resistance is eliminated). In a perfect vacuum, for instance, a feather will accelerate just as much as will a ball of iron.

Scientists have now performed a similar experiment in a satellite. They dropped two hollow cylinders and measured them for more than 120 orbits. The cylinders were in free fall for about eight days’ worth of time.

In the satellite experiment, the two cylinders’ accelerations did match — at least to within two-trillionths of one percent!

By the way, one cylinder was made of platinum alloy and the other from titanium.

That’s it for this email/ Newsletter.…

at October 10, 2022
Email ThisBlogThis!Share to TwitterShare to FacebookShare to Pinterest